Yurlov Russian State Academic Choir today is one of the leading Russian music groups with its number of represented concert programs, wealth of the repertoire and breadth of performance possibilities. The Choir is the constant participant of dozens of musical projects, events and festivals that take place both in Moscow and in other regions of Russia and the world. 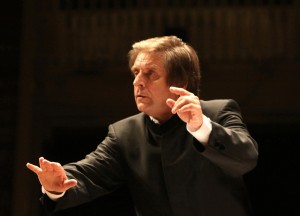 Under the supervision of the greatest modern choir and symphony conductor Gennady Dmitryak, who has led the group since 2004, the choir has traveled almost over the whole of Russia — from Kaliningrad to Magadan. Solo concerts of the choir has gone over with the huge success in St. Petersburg, Novosibirsk, Kazan, Nizhny Novgorod, Krasnoyarsk, Chita and in many other Russian cities. The choir has still strongly been expressing the powerful traditions of Russian choral art for the audience in Spain, Greece, England, Poland, North Korea, Armenia, Latvia, Lithuania, Estonia, where the performances have recently been arranged and received the most enthusiastic feedbacks from foreign musicians.

Gennady Dmitryak has managed to join sound power and flexibility, timbre richness and technical freedom in performing image of the choir. The choir nowadays is one of the largest choirs in Russia. It has more than 70 singers the vast majority of whom are young highly skilled musicians, graduates of Russian conservatories.

Gennady Dmitryak as music director who dedicated to the development and promotion of choral art in Russia has initiated a number of big creative projects that have become significant events of the modern Russian musical life.

In the autumn of 2012 with the support of the Ministry of Culture of Russian Federation the choir with great success implemented the project of Music Festival «Lubov Svyataya», dedicated to the memory of the famous group leader Alexander Alexandrovich Yurlov. The best domestic professional, student and amateur choirs for the first time in lots of decades at the festival were united in consolidated choirs, which performed vocal-symphonic compositions of Russian and foreign music.

Today the Festival «Lubov Svyataya» is one of the landmarks of the Yurlov Choir. In the autumn of 2013 the Festival was arranged for the second time which allowed to implement a number of unique musical projects such as the performance of Sergei Rachmaninoff’s Vespers  by 160-voice Choir of consolidated cities of Russia.

The choir is a constant participant of the Moscow Easter Festival, the Festival RNO, the International Festival named after Mstislav Rostropovich,  International festivals in Spain, Greece, Poland, Lithuania, significant events in the cultural, social and political life.

Here are a few recent creative projects, which the choir has taken part in:

Since 2005 Yurlov Russian State Academic Choir has been one of the main participants of the annual celebrations of the anniversary of the Great Victory, which takes place on the Red Square, Poklonnaya Hill, the Central Exhibition Hall «Manezh». The choir has also much performed in other social events: concerts in honor of the city, anniversaries of space exploration, in memory of people died in radiation accidents and catastrophes, in memory of the Armenian Genocide of 1915 and others.

Nowadays the choir has been recognized as one of the best performers of the Russian compositions of sacred music — the group has been still maintaining a living link with the tradition of Russian church music.

In May 2009 the choir has been awarded  with the First Prize at the XXVIII International Festival of Sacred Music «Hainuvka — 2009″ in Bialystok (Poland) and has received also the prestigious award of the Chairman of the Polish Television.

In the spring of 2014 in the framework of the XIII Moscow Easter Festival the choir performed with a huge success the program with spiritual works of Russian composers in The Assumption Cathedral of the Moscow Kremlin. 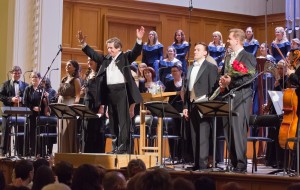 The actual repertoire of the choir includes nearly all compositions of cantata-oratorio genre of Russian and Western European music — from High Mass of I. S. Bach to the works of B. Britten, L. Bernstein, A. Schnittke, G. Kancheli, Gr. Tavener; the wonderful placer of choral miniatures — from Renaissance madrigals to music genre pictures of  Y. Falik, N. Sidelnikov, A. Larin. To this must be added the Russian and Western European classical opera, extensive programs of Russian folk songs in classical and modern arrangements, the works of pop music, rock opera.

By keeping the best traditions of Russian vocal-choral art the Choir today is actively developing the new spheres of musical, social life and is eager to be actively realizing its social, cultural and civil potential inside. «In the Russian choral tradition not only the ordinary chapter of the national culture should be seen, but the treasury of symbols of national unity through suffering in the long history of our country. This treasury, fortunately, is available to us, and it would be a mistake to underestimate that spiritual and cultural wealth which it keeps inside»(Gennady Dmitryak). 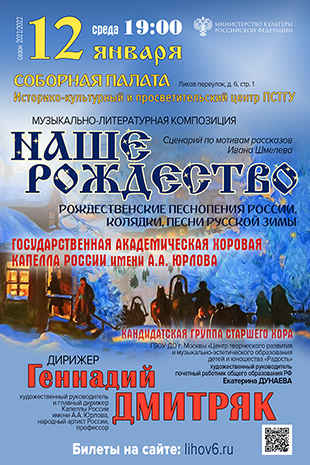